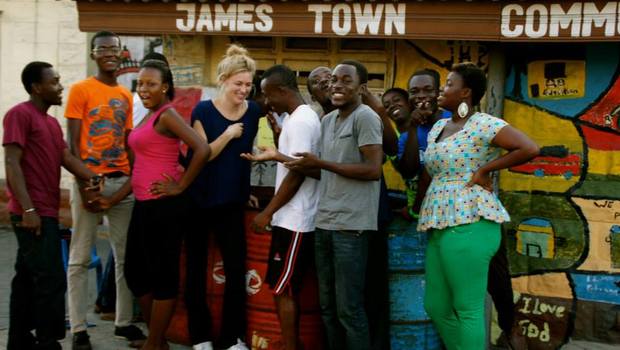 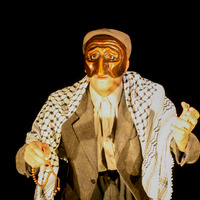 A project by Theatre Hotel Courage in Ghana

We are all stories in the end. Every country, community and individual has stories worth telling. Many centuries ago the art or craft of storytelling became known to the public as commedia dell’ Arte. The closest translation of the name is “comedy of craft”; it is shortened from commedia dell’arte all’improvviso, or “comedy of the very creative ability of improvisation”.The craft was performed outdoors in temporary venues by professional actors who were costumed and masked. The characters of the commedia usually represented fixed social types such to whom we nowadays refer to as archetypes. Groups of people gathered around on market squares to listen to the storytellers. Since then millions of stories have been told all around the world. Over the course of centuries the technique of commedia dell'Arte has been taught at universities and in theatres, cultivating the beautiful craft. Katrien van Beurden, artistic leader of the international theatre company Theatre Hotel Courage, has a passion to enable people all over the world to act. With her company she develops contemporary shows based on modern Commedia dell’ Arte, the first professional actors theatre in history, famous for its masks and archetypes. Hotel Courage explores this theatre in today’s society to create a tragic-comic-poetic theatre that is vivid and alive and easily accessible. From all over the world people ask Katrien, who is considered to be future of commedia dell'Arte, to teach them. "In my educational projects I want to give actors the opportunity to get a high level education in acting and storytelling, so that they can tell the stories they need to tell. It is not only a goal but also a dream that I dedicate my life to. Until now I have done it without financial support, but since the amount of requests have grown I can’t finance it on my own any more."

Katrien and a part of her theatre company travel all around the world to train actors. In a 3 week period they will educate the actors, enabling them to perform and teach future actors. In countries where people live under challenging circumstances Katrien and company will donate their time and passion to help fulfill dreams of the local actors. In townships and refugee camps they meet people who are very talented and want to work on creating a better future! The actors only need the know-how and props so that they can tell stories that need to be told. Every country, community and individual faces problems. Those problems will not go away but need to be adressed. 5 masks and 2 lamps will enable the actors to adress various problems in their shows. It is about equality and dignity, providing the opportunity for people who want to change their future and that of their community and eventually their country to do just that. Street theatre easily attracts groups of people. Those people need to talk about the challenges they face and problems that need to be adressed. Think of child abuse or horrible diseases like Aids and Malaria. The important role the masks play is that everybody everywhere recognizes the archetypes they represent. The stories however are not the same but the technique is universal applicable.

To give people a chance to tell their story. To enable actors to make an audience laugh, cry and eventually have a good conversation with so that they can adress topics that need to be adressed. Jamestown is one of Accra's most economically disadvantaged suburbs. Since 2003, a group of actors from the suburb is trying to create a centre ‘Theatre for a Change’ to transform the lives of children in the area with participatory behaviour change workshops, advocacy performances and support programs. The organisation ‘Act for Change’ has asked Katrien van Beurden, founder and artistic director of Theatre Hotel Courage to help them professionalize the actors acting skills. Theatre Hotel Courage wants to train a group of 25 – 30 actors for one month in the township of Jamestown and leave the necessary props with them so that they can continue to educate other people.