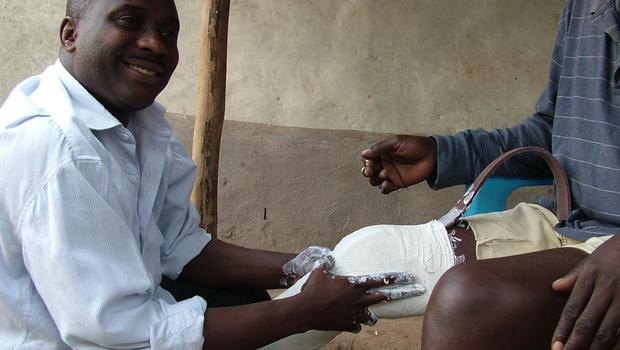 A project by Jonna Both in Uganda

Yumbe District in Uganda has been affected by 20 years of conflict between local rebel groups and the Ugandan Government. This has resulted in many people being injured by landmines and other munitions. Ten years after the signing of peace in 2002, these people still remain without any medical rehabilitation. Today, adults and children alike still fall victim to explosive remnants of the war. Yumbe District is still in the process of stabilization. Little, if any, attention has been shown by either government or private organisations to restore the mobility of the victims of landmines and munitions. The health system is extremely underfunded, and the rehabilitation of people with disabilities is only provided by non-governmental organizations. Even though orthopedic services are available in the regional referral hospital, the inadequate resources are confined to Arua and Nebbi Districts.

1. Sensitization of stakeholders at the sub-county levels in the 13 sub-counties of Yumbe District (In detail: involving the different local authorities (local leaders) in the Amputees Walk Again intervention: creating awareness about landmine-victims in their communities, which types of disabilities prevail due to landmines, what COMBRID can do for landmine victims (and how, when and where) and teach authorities on what they can do for landmine victims and how they can prevent marginalization of peoples with disabilities in their communities.) 2. Assessment and casting of the amputees at sub-county level. 3. Procurement of orthopedic materials and components. 4. Processing and fitting of artificial limbs in the orthopedic workshop. 5. Training amputees on the use of fitted artificial limbs and consulting them (through CBR workers) on the use of their increasing mobility towards greater productivity so as to cater better for their (rural) families. 6. Follow-up of amputees after 3 months in their homes. (In detail: the follow-up is meant to assess how the land-mine-amputees are using their prostheses in their natural (home) setting, to make small adjustments and to give further advise fitting to their daily situations and needs. The follow-up will be carried out by two orthopedic workers and a CBR worker.)

The main goal is to restore the mobility of 45 landmine victims in Uganda whose lower limbs have been amputated. We will also help enhance productivity of the affected persons in order to positively influence general family well-being. These goals will be attained through the provision of artificial limbs and Community Based Rehabilitation guidance.